Is it sensible to take a center-city area that up to now has been characterized by a mix of uses, and to designate it solely for "culture and tourism?"

Relatedly: should historic buildings be, on principle, emptied of workaday uses and dedicated exclusively to "culture and tourism" uses (e.g., boutique hotels)?

Such is the approach that the Jerusalem Municipality is currently taking toward Jaffa Road and environs -- the area that most locals simply think of as "downtown" but which is increasingly being referred to as the "historic city."

I think that this approach needs to be subjected to public scrutiny. I, for one, see two major problems with it:

1) The segregation of uses that it imposes will make downtown Jerusalem a much less attractive destination for regular Jerusalemites and Israelis, essentially rendering it a tourist trap whose artificiality will be perceived by the more discerning tourists;

2) By removing historic buildings from circulation as facilities where normal, everyday activities take place, and by devoting them to tourist-oriented uses, the planning echelon will be dividing Jerusalemites and Israelis from their own architectural heritage, thereby impoverishing them culturally.

As noted in my last post, which discussed the recently-approved plan for a high-rise office park at Jerusalem's western entrance, Deputy Mayor Kobi Kahlon has stated that "anyone who doesn’t have to enter the city shouldn’t do so. Leave the historic city to culture and tourism.” Downtown Jerusalem, according to Kahlon, is simply too fragile to "take the load" of the governmental/clerical functions currently housed within it ("You toss out two pieces of paper there and the city is filthy"), and is altogether suited to the expression of "much greater meanings."  The idea is that certain activities are just too mundane for the traditional architecture of downtown Jerusalem, and should be transferred to the envisioned skyscraper complex at the city's entrance -- "Rova Mevo Ha'Ir."
﻿ ﻿
In keeping with this idea, government offices now located in Jerusalem's "historic city" are slated to be moved to Rova Mevo Ha'Ir. Furthermore, according to Haaretz, "the Planning and Building Committee is also discussing a plan to turn the old ministries' offices, some of which are located in historic buildings, into boutique hotels."

One building that has been mentioned as a prime candidate for such a re-purposing is the "Generali" Building at the corner of Jaffa Road and Shlomzion HaMalka St., built in the 1930s to house the offices of the Italian insurance agency Assicurazioni Generali. The Generali Building is currently home to a number of Israeli government offices, including the Interior Ministry's Jerusalem District administration.

I haven't had anything to do in the Generali Building in years and don't know to what extent Israeli citizens are inconvenienced by having to conduct their business in that particular location. Deputy Mayor Kahlon claims that the presence of government functions in buildings such as this one "cause[s] terrible traffic downtown, as well as parking shortages". I find this assertion rather curious, inasmuch as Jaffa Road has been closed for some time to vehicular traffic other than the light rail -- the idea being that people should get to that part of town via public transit and forego the use of their private automobiles. If you're riding the light rail, why do you need parking? How can there be traffic jams in a part of town where cars are no longer allowed?

I don't pretend to know whether public-sector efficiency is best served by concentrating government offices in one specially-designed compound -- i.e., Rova Mevo Ha'Ir. It does strike me, though, that when ordinary citizens come downtown to run errands at government facilities, downtown can only benefit-- since a citizen who enters the area for one purpose will likely remain there for others. Logically, it would seem that when downtown Jerusalem is emptied of its government offices, regular Jerusalemites and Israelis will have less occasion to go there. Are we quite certain that this is what we want?

I personally don't have much reason to go downtown, as most of my needs can be met in the Talpiot Industrial Area -- the badly-neglected "secondary" CBD that, in my view, actually functions as primary CBD for a sizeable chunk of Jerusalem's population.. However, this past summer I enjoyed a brief but instructive city-center idyll that brought home for me just what is wrong with the Kahlon plan for this part of town.

Pictured at left is a historic building at 86 Jaffa Road -- one that, presumably, the Municipality would want emptied of its governmental functions and turned into a boutique hotel. This Ottoman-era edifice was constructed in 1882 as a residence and later turned into a hospital; since the British Mandate period it has housed the Jerusalem district health office.

I had to bring my 3 year old daughter to this building several times this past summer, for a series of anti-rabies innoculations (after she was scratched by a stray cat). Never having needed the services of the district health office before, and having no prior knowledge of the facility's whereabouts, I was very pleasantly surprised to find myself ushering my daughter into this distinguished old structure, the formality of whose arched stone gate is set off by a soothing little front yard and welcoming, geranium-filled porch: 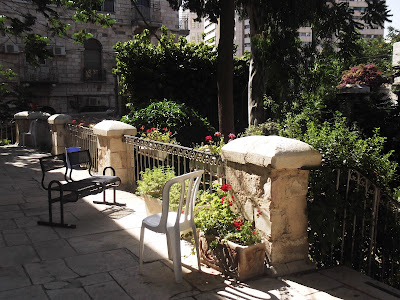 Rather than having to sit in an institutional waiting room for the prescribed 20 minutes post-innoculation, my daughter and I (and the other kids I brought along on the various vaccine visits) were able to enjoy our mid-morning snack out here on the district health office porch, joined by the occasional employee on coffee break. When we were through, we stayed downtown, running different errands each time. On one occasion we picked up inexpensive crafts supplies at a discount store; on another -- paperbacks at a second-hand bookshop. I got to familiarize myself with some clothing stores I had never seen before. We bought slushes and iced coffees, burekasim and cookies. We discovered a newly-renovated playground in the downtown area that constitutes a worthwhile destination in and of itself.

Had we not needed the services of the local rabies prevention unit, we would not have patronized any of the aforementioned downtown businesses. We simply wouldn't have been downtown.

Our forays to the city center were both enjoyable and productive. We didn't go there for the specific purpose of experiencing "culture." We got a healthy dose of "culture" just by taking care of some decidely mundane business at the scenic venue of the Jerusalem district health office. And we were able, afterward, to run a variety of errands on foot, within a radius of just a few city-center blocks. Culture and commerce, pleasure and efficiency -- the blessings of mixed-use development.

Unfortunately, current urban thinking in the Jerusalem Municipality appears to have stalled at the "separation of uses" stage. Much lip-service is being paid to the idea of mixed-use development, but the plans being actively adanced call for a fairly rigid compartmentalization of uses.

Whether 86 Jaffa Road in particular has a boutique future in store for it is not the point. The point is that Kobi Kahlon thinks "we have to empty [Jerusalem's historic downtown] of all the officialdom [פקידות] and other uses. This city has far greater meanings."

I'm sure that when Kahlon talks about Jerusalem's "greater meanings" his intentions are reverential -- and that is the problem. It's one thing to appreciate the city's history and to want to  preserve its unique character in those areas where "character" has a tangible presence in architectural form. However, putting specific parts of the city on a pedestal and dictating the kinds of uses that can take place in them, is quite another matter. It's almost like the objectification to which men sometimes subject women -- an idealization that ultimately devalues.  Rather than having someone alive and dynamic to relate you, you end up with a porcelain doll, a trophy wife, a puppet.

In the case of downtown Jerusalem, what we could end up with, if we're not careful, is a sterile museum in which tourists lap up lattes and empty their pockets to purveyors of kitschy Judaica while street mimes and jugglers leap and frolick in a frenzied effort to conceal the emptiness at the core of downtown -- a place where no actual work goes on, where no real life is lived, where nothing productive happens.

We already have an "Old City" that is devoted to religion, tourism and religious tourism. Do we really want to start calling that part of town the "Old Old City?" Must Jaffa Road now become a "New Old City" -- a static Disneyland of handsome traditional architecture housing nothing but cafes and boutiques?

I don't want to be unfair to Kobi Kahlon. I have no problem with his desire to add office space in the city entrance area or even, necessarily, with the transfer of government agencies to that part of town -- provided that such transfers are clearly in the public interest. What bothers me is the assumption that governmental and commercial/corporate affairs are best managed out of dedicated skyscraper complexes, while historic downtowns and traditional architecture should play a merely ornamental role in the life of a city. In the present post I have looked at the latter half of this false dichotomy. In my next post I hope to discuss the former in greater depth.
Posted by Julie@walkablejlm at 6:54 AM

Advocating for good urbanism in Jerusalem